Designing a student pavilion Inspired by the structure of minerals 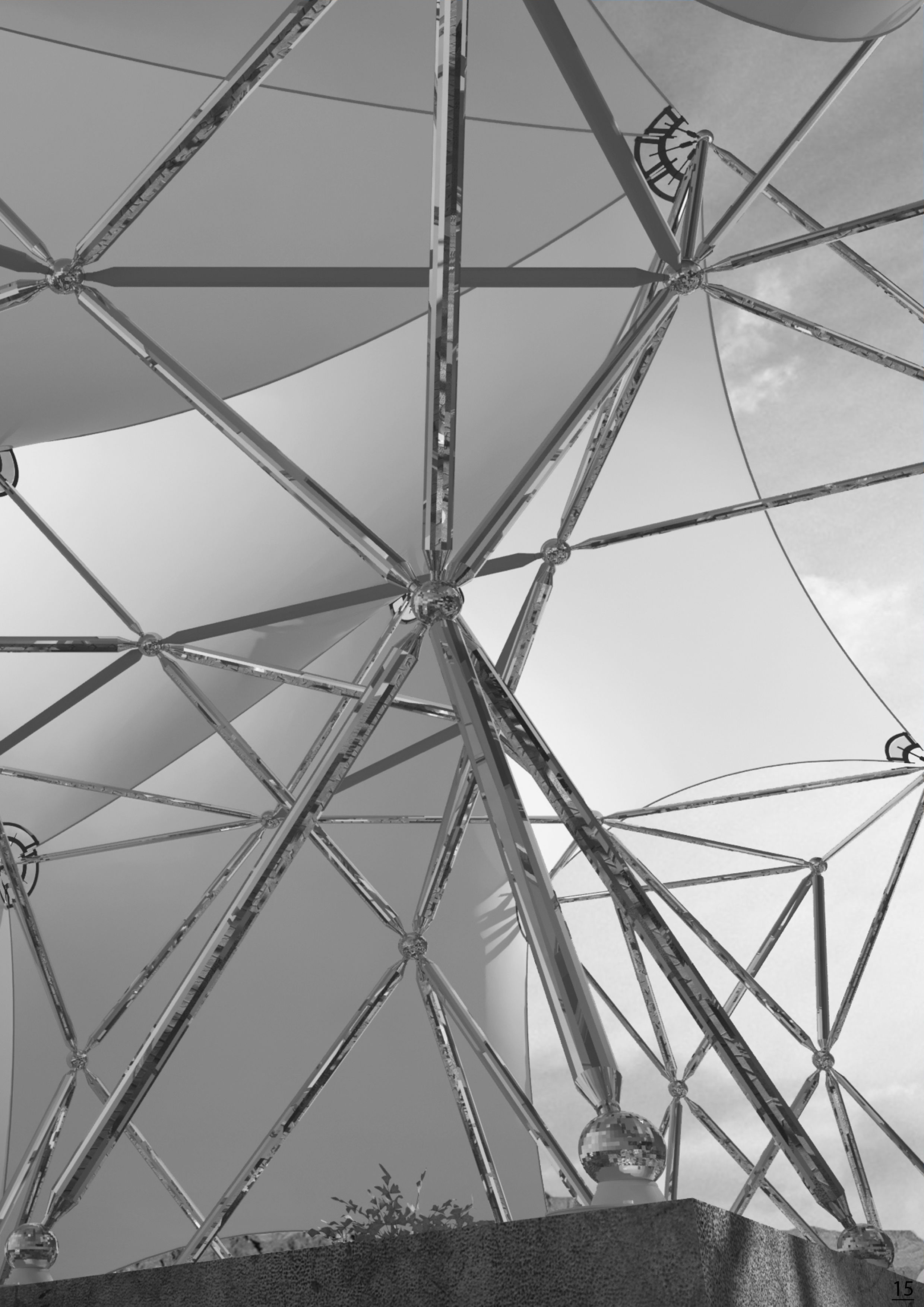 Today, focusing attention on universities as influential social institutions is very important. Students spend a large amount of time in this place every day and; in addition to learning, they do group work and side activities such as cultural or artistic ones and so on. Considering the biological and interactive qualities for academic spaces, it is obviously necessary to pay attention to their spatial quality in order to reach a desirable place. Designing a Pavilion with a straightforward and independent structure to be installed in open spaces and able to accommodate applications such as exhibits, music performance, a place for temporary rest, and so on is viewed as an appropriate solution. In this research, we aim to design a pavilion next to the faculty of Art and Architecture in Kashan university. This will be done by the use of bionics and in order to model the nature for optimization of architectural form and structure. The natural sample studied is minerals whose characteristics such as compressive strength, specific weight and hardness are under the influence of their geometric structure. After analyzing and investigating the structure of the minerals, the geometric model of one of them was simulated by Rhino software and after optimization with Sap software and considering the maximum compressive strength and minimum weights as well as an aesthetically suitable composition, it was selected as the form of the design of the pavilion.

Mineral: A mineral is a natural, homogeneous, inorganic crystalline solid that has a distinct, but not necessarily constant, chemical composition.

Mineral structure:The mineral structure consists of unit cell and lattice. The unit cell is a set of atoms arranged in a special order. The lattice is the paths of points that are constantly repeated in three dimensions. These three dimensions are represented by a, b, c, and are called crystallographic directions. The physical properties of minerals depend on two factors of geometry and their structure and inter-molecular forces.

Classifications of minerals:Minerals are catogarized by their chemical composition and their structure.Minerals are classified into two major groups of non-silicates and silicates. Non-silicate minerals are classified into a variety of natural elements, Oxides, Hydroxides, Sulfides, Sulfates, Phosphates, Carbonates, Halites, Nitrates and Borates. Silicates, depending on their four-sided connection to each other and their arrangments, include Islet silicate, Double silicate, Ring silicate, Chains silicate, Sheet silicate and Framework silicate. 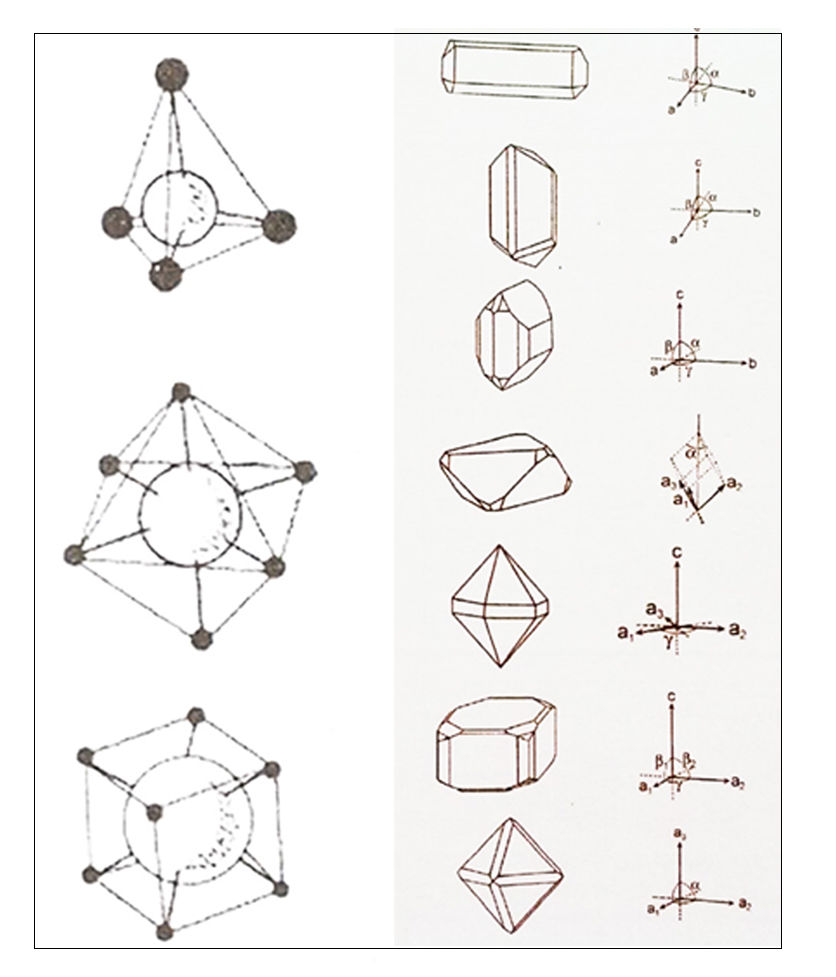 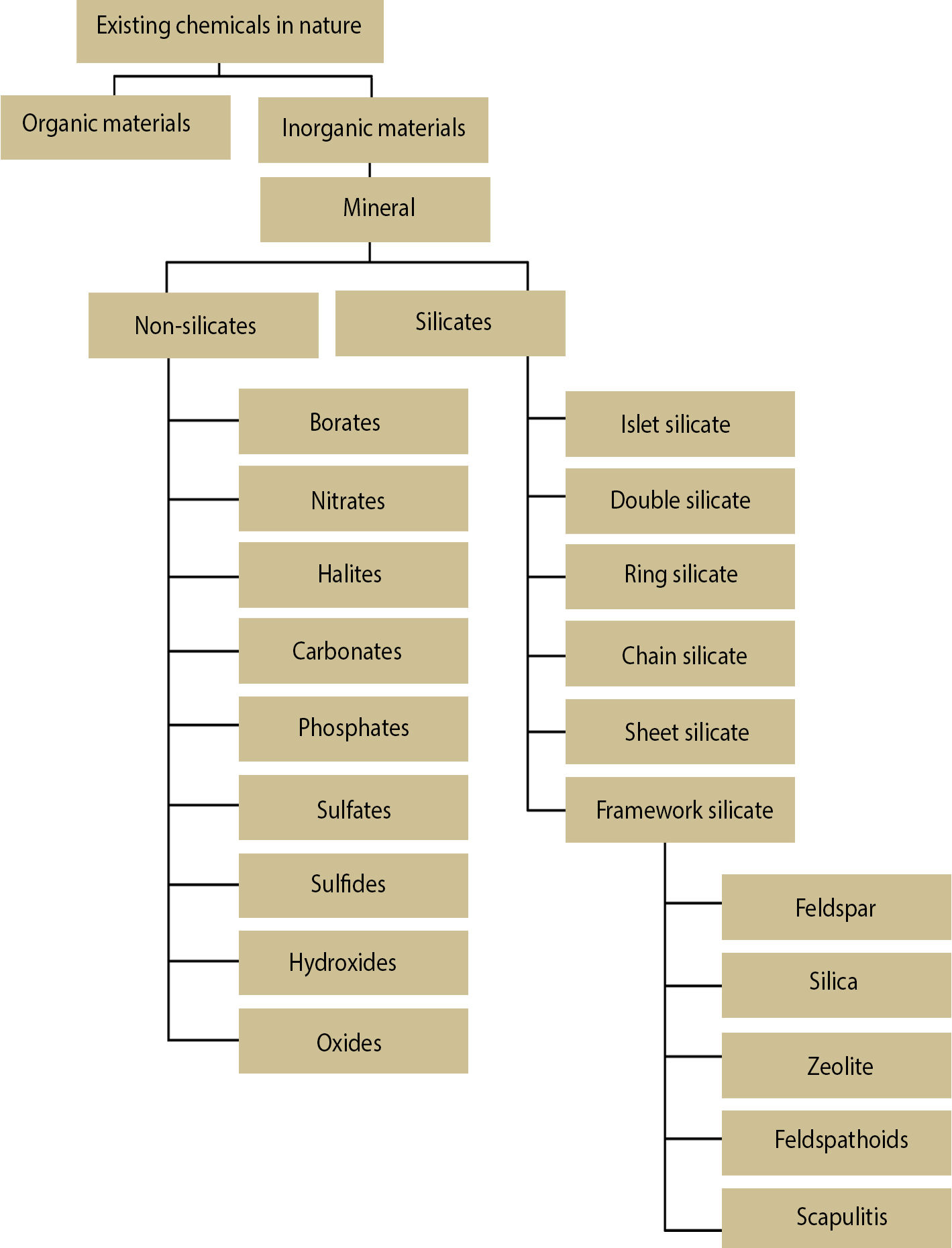 Selecting the final sample: After getting acquainted with the minerals, we should be able to select one structure among them as a natural sample ; by the inspiration of which we can design an optimal structure in strength and weight. Obviously, the structure that has the most resistance and the least weight for the mineral can be considered as a model for designing the structure. 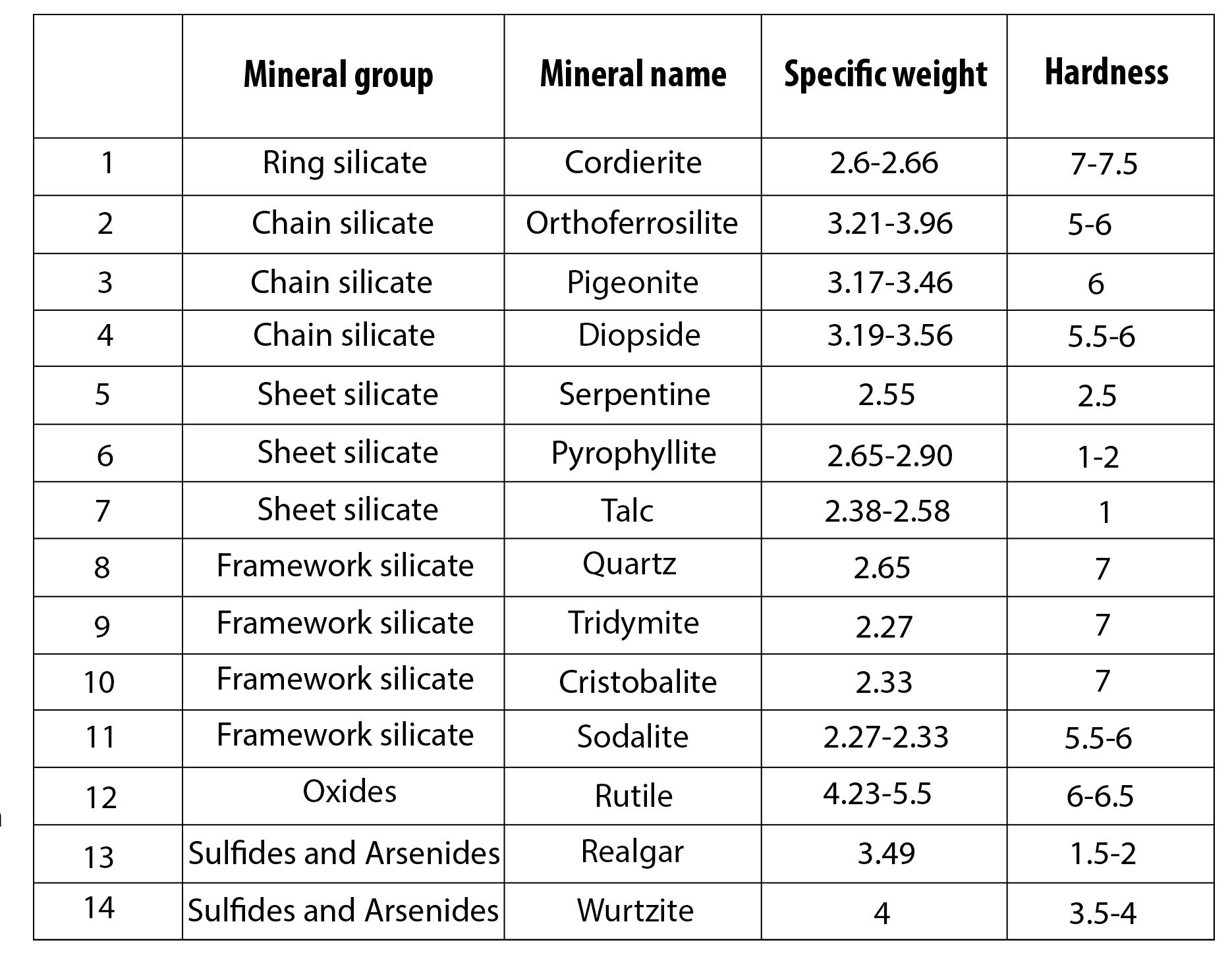 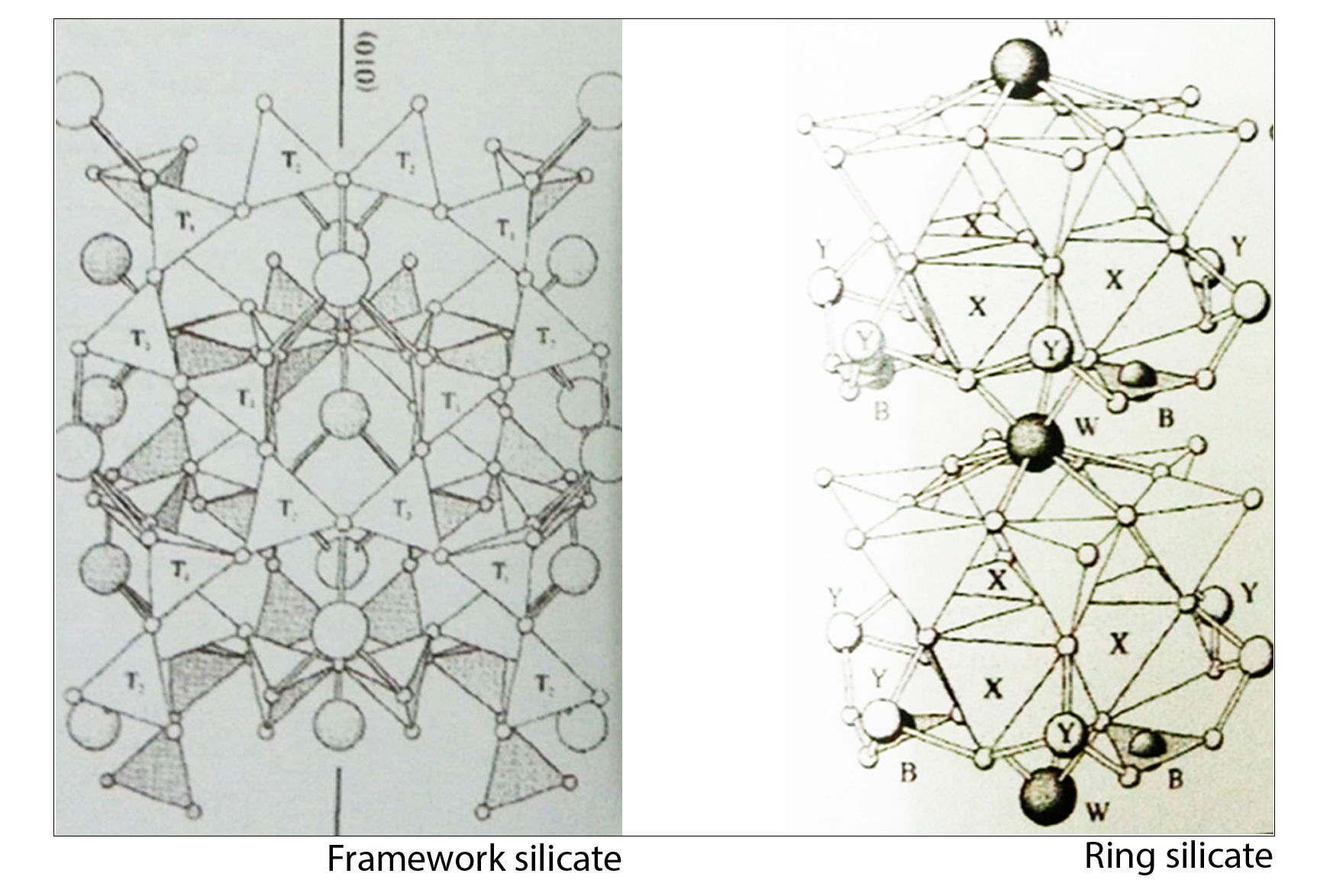 Framework silicate: The three-dimensional network of framework silicates consists of tetrahedrons attached to SiO4. All of the oxygen atoms located in each four-sided SiO4 are shared with the neighboring oxygen atoms in the four-axes. The result of this sharing is a sustainable structure with strong connections. Framework silicates are divided into five groups of Silica, Feldspars, Feldspathoids,Zeolite and Scapolites. Each of these groups has a special structure with specific geometry. All these geometric structures are illustrated in the following pictures. 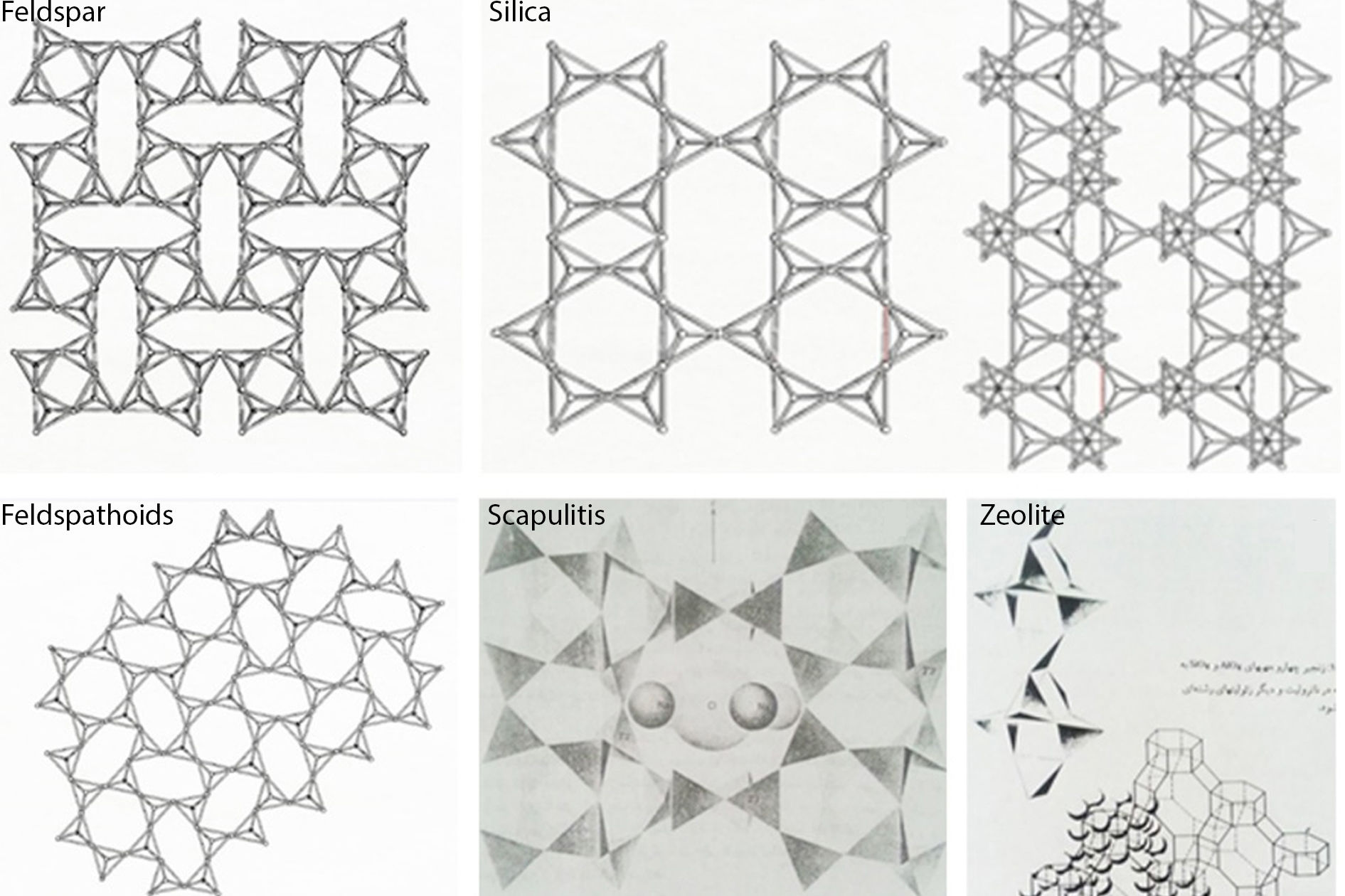 Comparison of the data in terms of compressive strength and tensile strength: After familiarizing and investigating the geometry and structure of Framework silicates, for selecting the final sample, each of the groups of Silica, Feldspathoids, Zeolites, Scapolites and Feldspars is selected as a mineral, and by carrying out a point load test in the engineering geology lab at Esfahan University the compressive and tensile strength of each one was measured.

ComFinal result: After studying on a wide range of minerals, by analyzing, comparing, and conducting experiment, the best model for structural optimization with a maximum resistance and minimum weight is the Feldspathoids group of minerals, which is a natural example for designing an optimal structure.

Modeling and Optimization: The structure of the Feldspatoid group of minerals was modeled as a prototype by Rhino software. The structural unit of the Feldspathoid is a tetrahedron that is attached to the same shape with a fixed layout. The four corners connect to each other by sharing their oxygen molecules.

Considering the overall dimensions of the intended site for the Pavillion, which is about 13 by 15 meters, as well as the function of Pavilion, part of the original Feldspathic structure was selected as the Pavillion structure.

Structural analyses in SAP software : The instrumental analyzes in SAP software were done on the proposed structure. Since the stability of the structure of minerals depends on two factors of geometry and molecular bonds between them, the rigidity of the 8 nodes in the joints is a requirement of structural sustainability. Except for 8 nodes, the rest of the joints are of a pin type. In the process of structural analysis in Sap, different cross-sections were selected for the members and, in accordance with the tension analysis graph, the best cross-section was finally selected to achieve the lowest weight and maximum resistance. 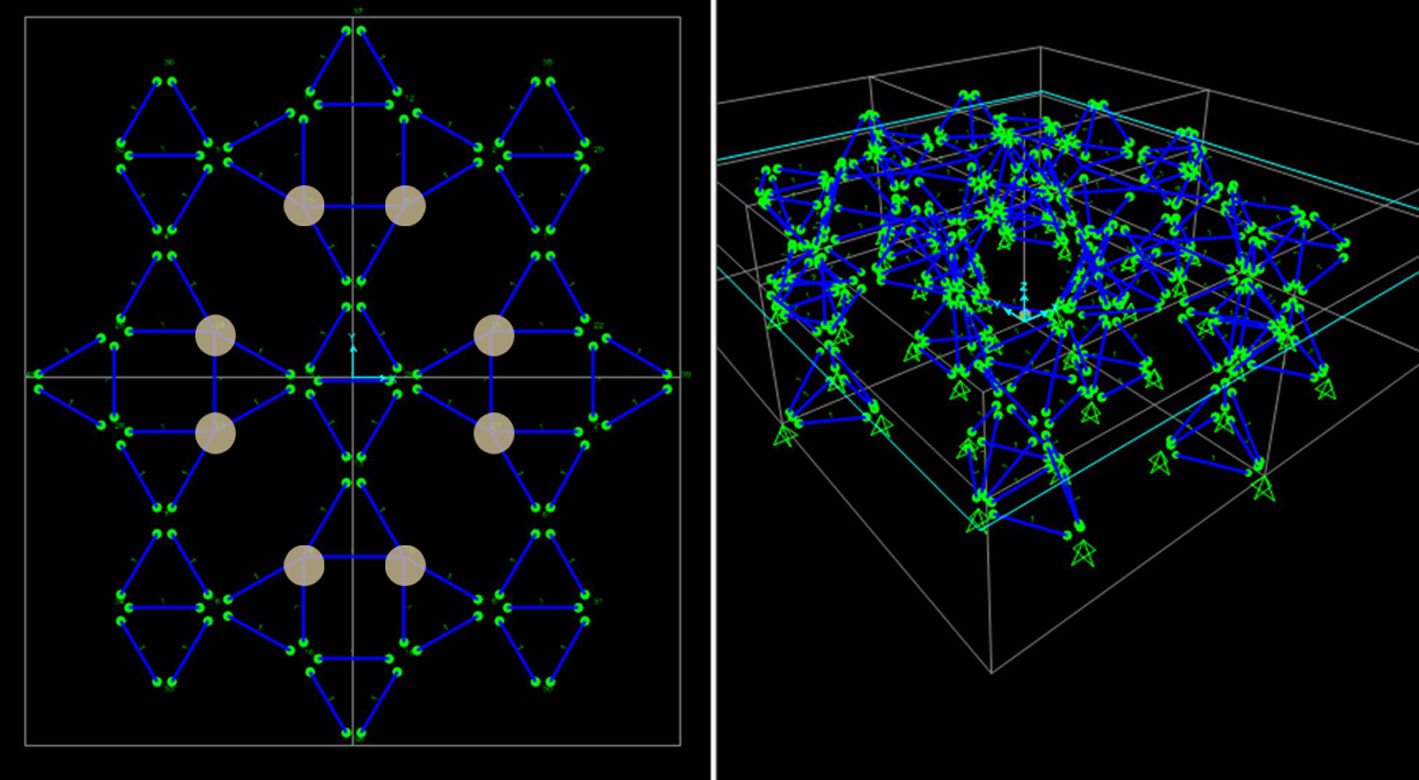 Some structural analyses of three steel sections with diameters of 5, 4 and 6cm and a thickness of 0.3cm were performed. With diameter increase, tension analysis graphs showed fewer members with a critical color of red.

According to stress analysis graphs, the most optimal sections with 4 types were selected to achieve the lowest weight of the structure. 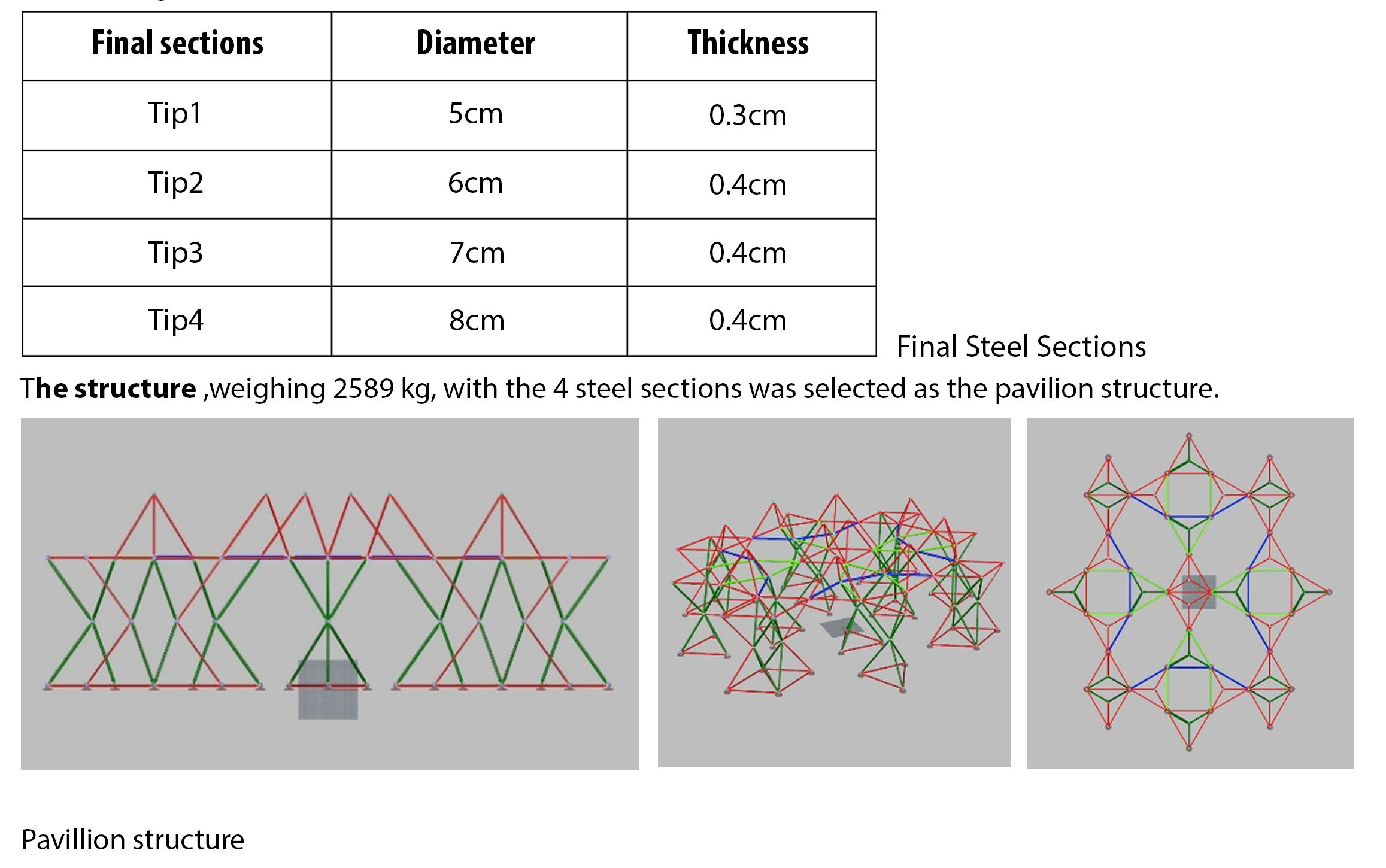 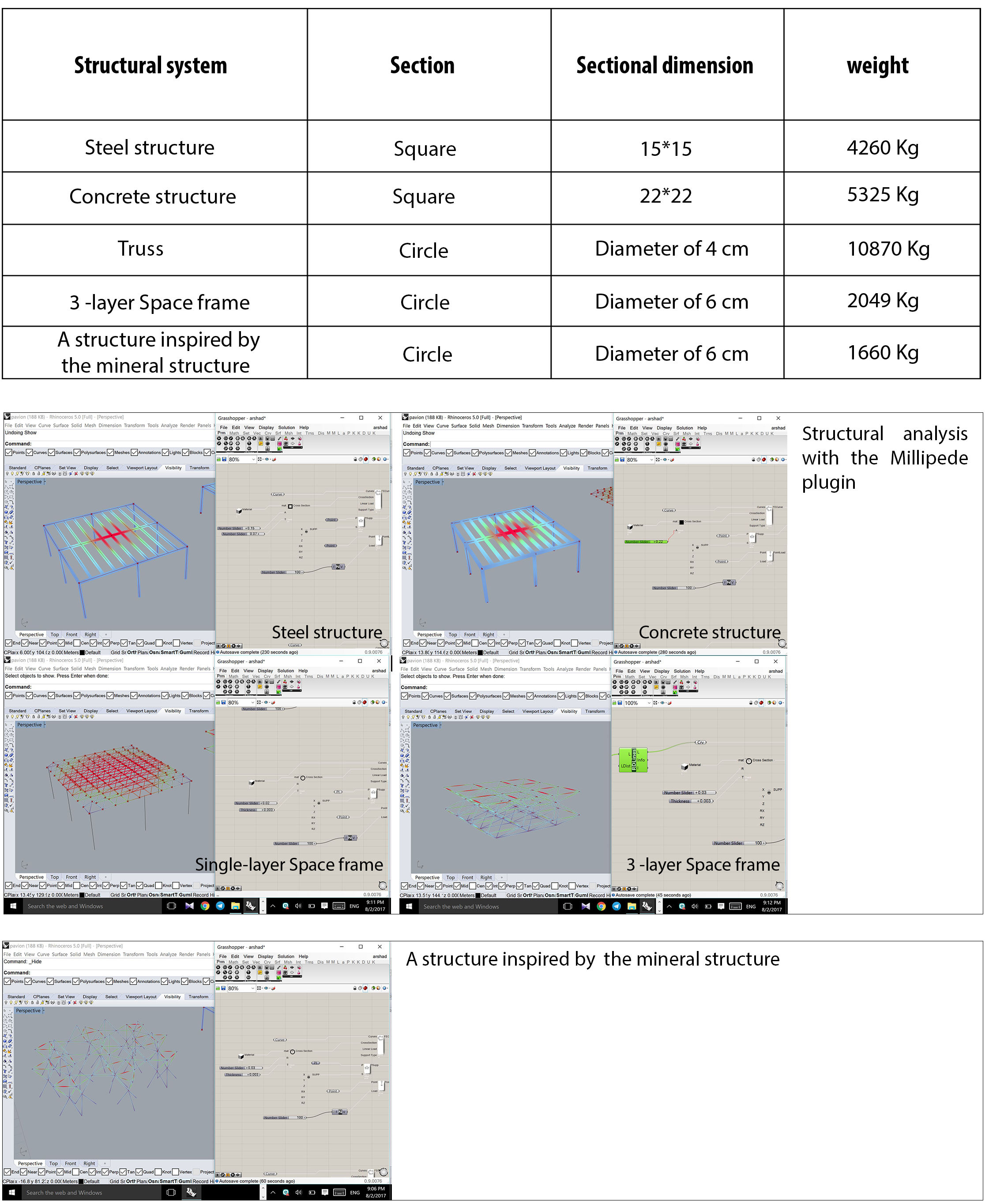 From the comparison, given the low weight, as well as the spatial diversity and the form that the mineral-inspired pattern can create, this structure was chosen as a suitable form for the design of the pavilion. 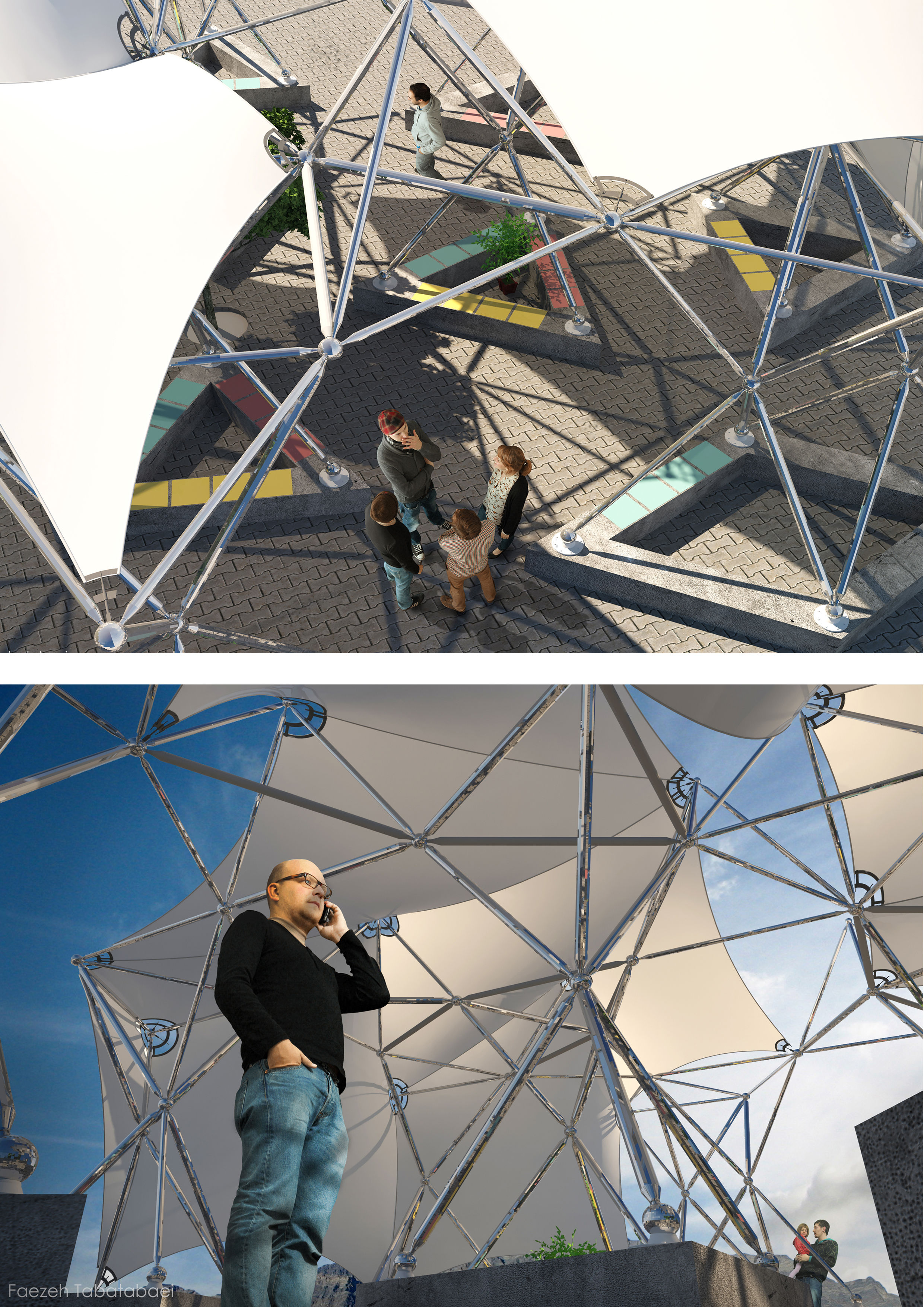 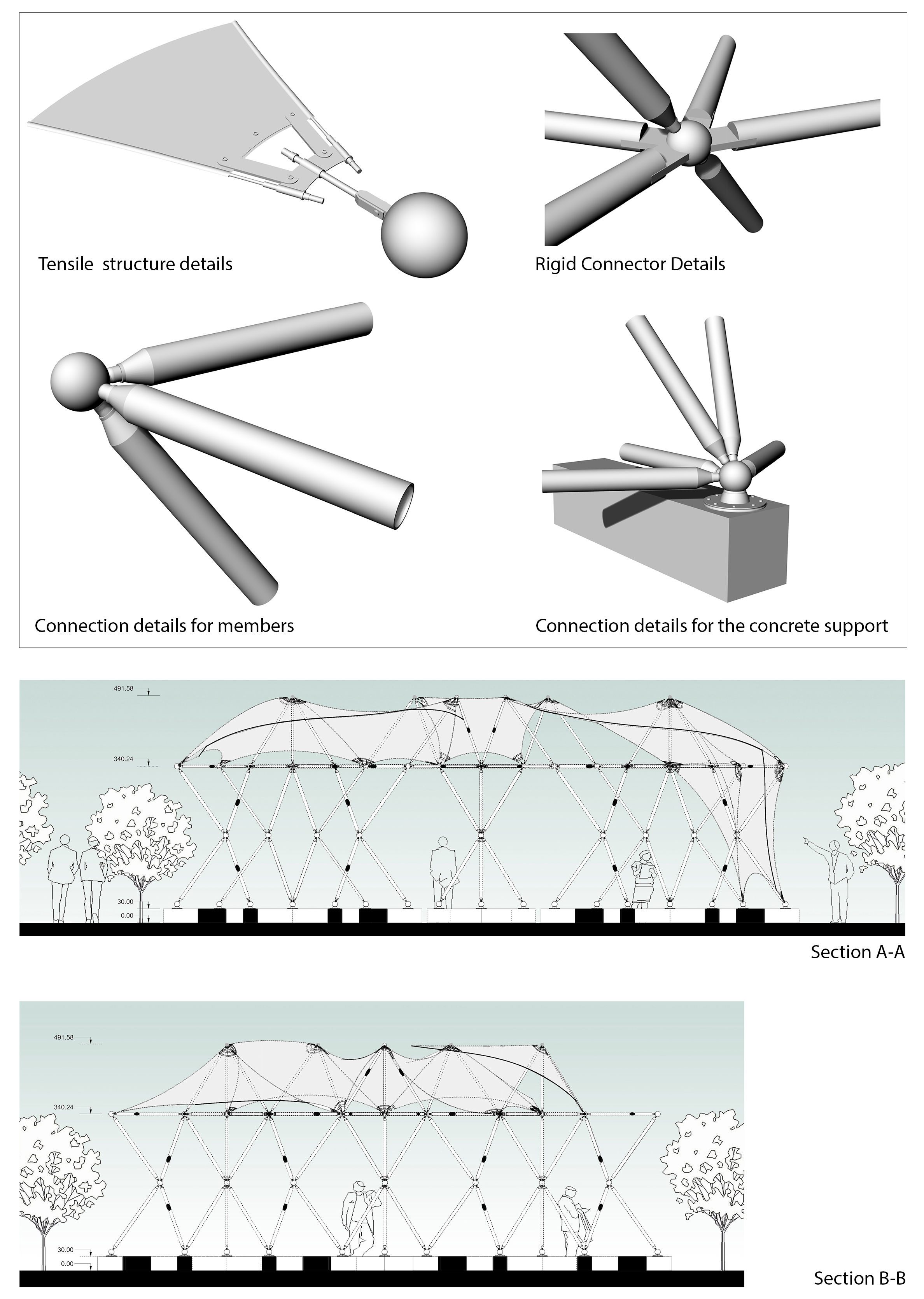 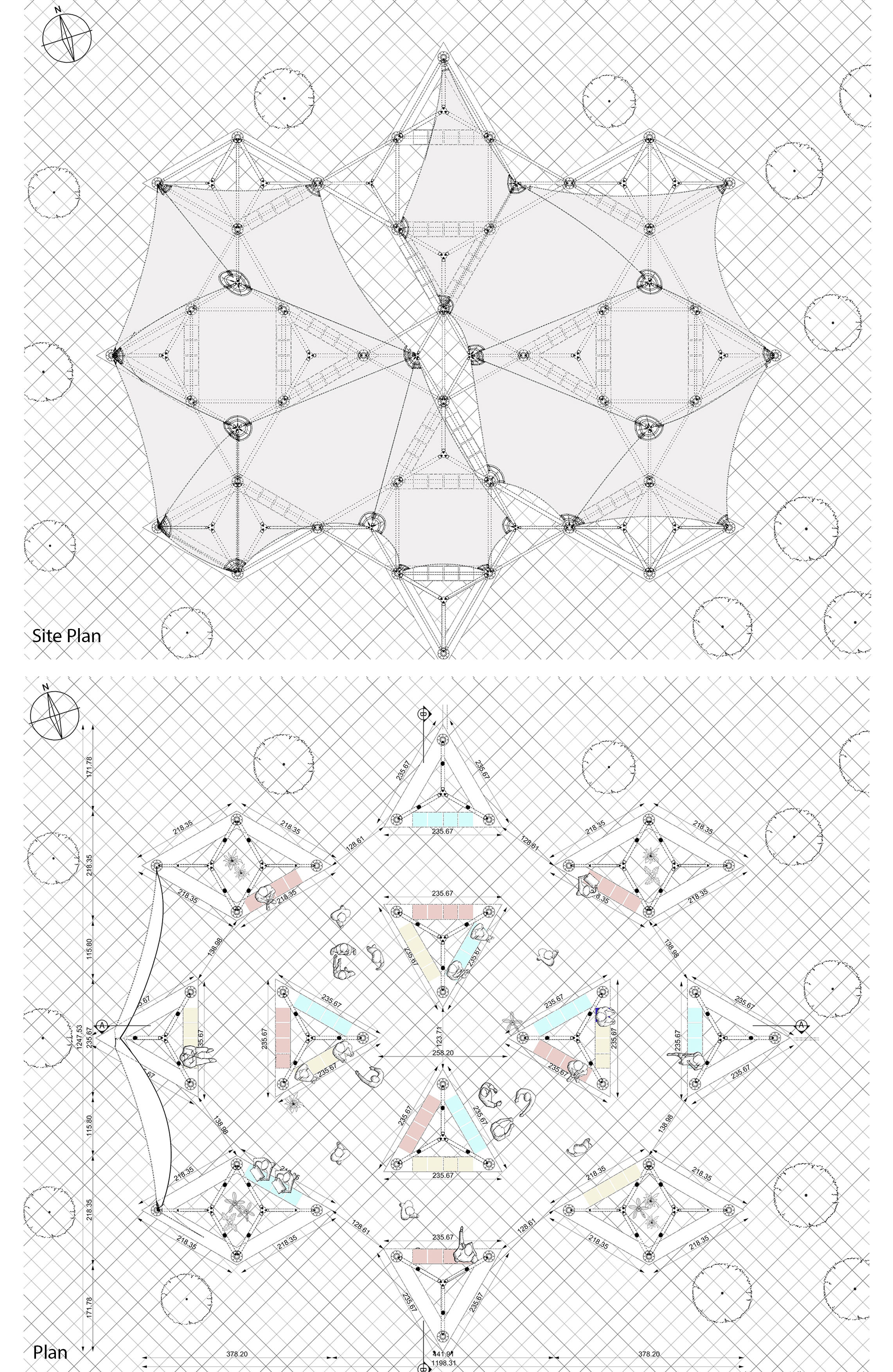